One of my favorite books is a book called A Field Guide to American Houses. It’s the best reference book that I’ve ever owned.

I can appreciate that this is an eccentric opinion, but I think reference books are exciting. I’m talking here about atlases, dictionaries, style guides, and so forth. I like how they help you make sense of things by fitting various concepts into neat little boxes. I like how they help you nail down the subtle differences between related but distinct ideas, and how they do that with a degree of authority and comprehensiveness that a Google search just can’t match.

A Field Guide to American Houses is basically an index of all the major architectural styles that have been used to build houses in the US. These styles are ordered chronologically, so you can read the book from front to back to get an historical survey of how architectural styles in houses have changed over time. The authors also provide a “pictorial key” that allows you to lookup a noteworthy visual feature of a house you see and use that to identify the house’s architectural style. Then there are a few chapters explaining the basic constituent elements of a house and some terms to describe variations in those elements. You can learn about the difference between a front-gabled and a side-gabled house, about how houses are framed, about all the parts that make up a doorway.

It’s brilliant. Just look at how wonderful these diagrams are: 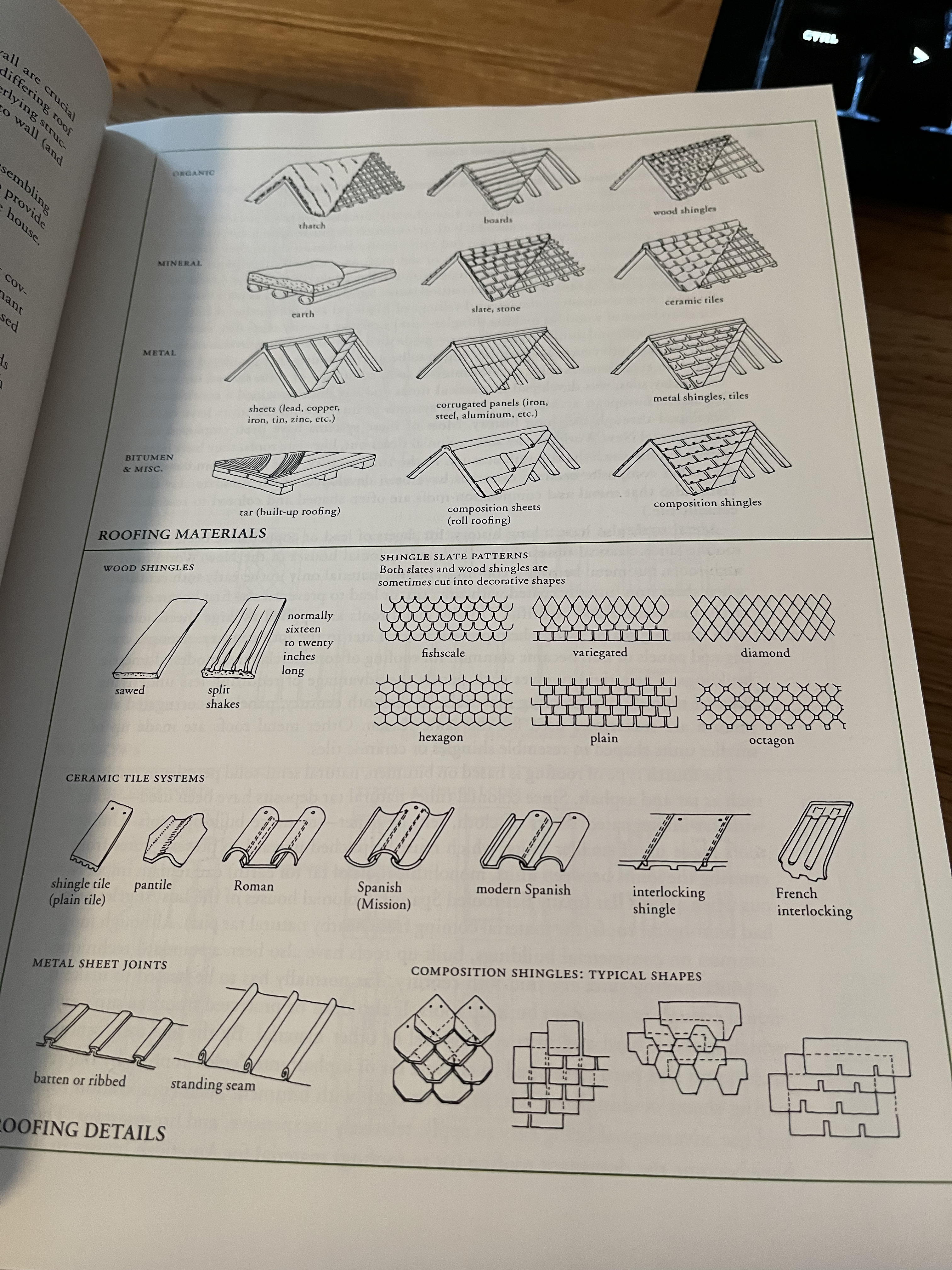 So, in order to reinforce what I’ve learned by reading A Field Guide to American Houses, I thought it would be a fun exercise to try to describe a house I like in my neighborhood of Cambridge, Massachusetts.

Here is the house: 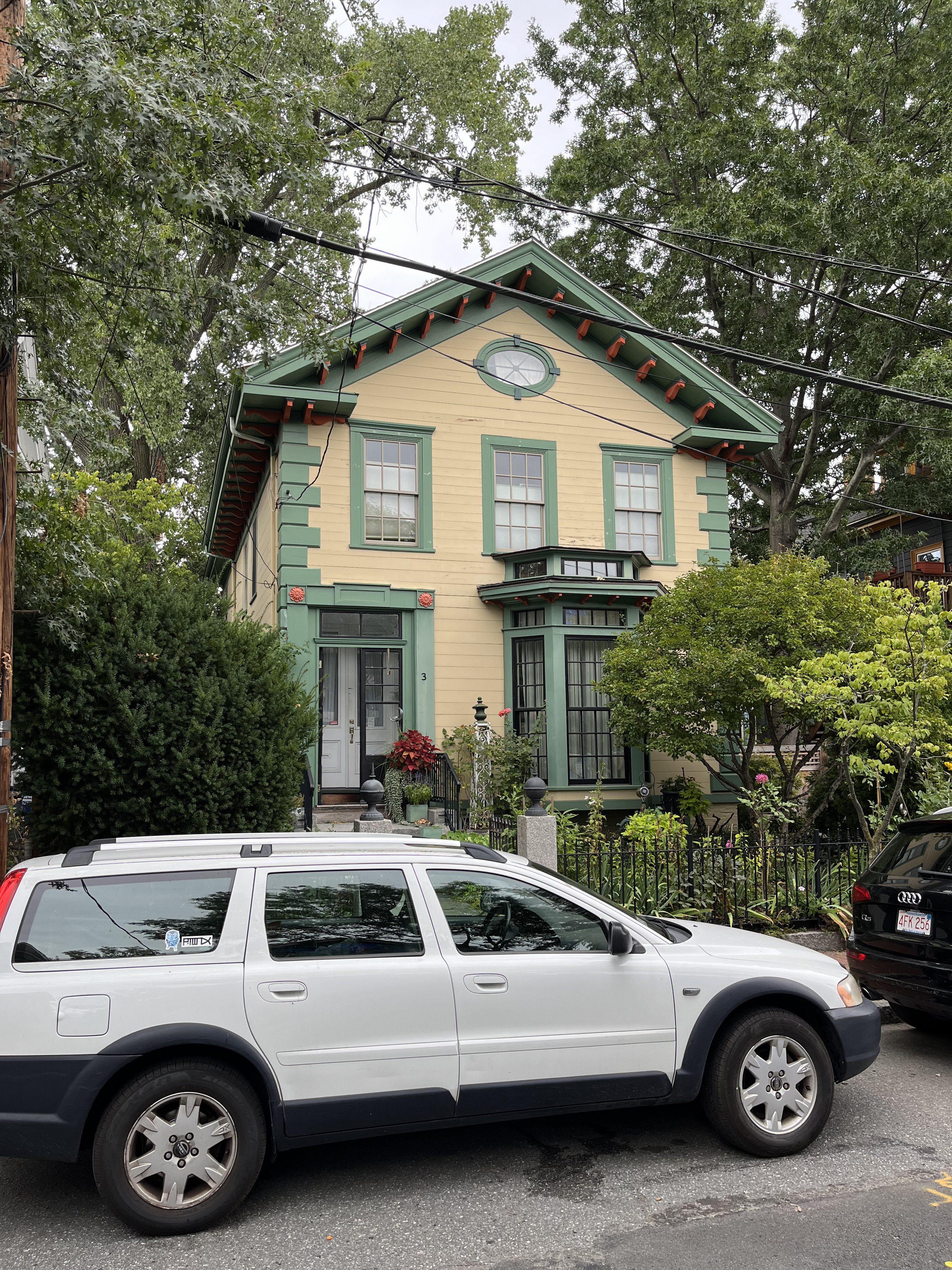 I’ve walked past this house many times before and have always like it. One thing that draws me to it is the color scheme—the yellow with the green trim is nice. But there are other things I like about it that I haven’t been able to describe without consulting A Field Guide to American Houses for some additional vocab.

Really the most distinctive feature of this house is the faux quoins. The quoins in the above photo are the green blocks of wood that run up the corners of the front facade in that alternating pattern. Quoins are typically only seen in masonry walls, where they are made of large stone blocks laid in that alternating pattern (whereas the rest of the wall might be made of smaller blocks laid in a different pattern). Here though we have wood imitating large blocks of stone, which I think is pretty neat. You can see that they’re even beveled around the edges to look more like big slabs. I think the quoins give the facade a whiff of grandeur and solidity.

Another thing I like about the house is the way the roof comes down toward the edges and then wraps back in to frame the oval window in the gable. (The gable is the triangular bit of wall immediately below the roof.) There’s a name for this, but first let’s make sure we’re clear on the difference between an eave and a rake. The parts of the roof that protrude over the sides of the house above are called the eaves. The part that protrudes over the front facade and the gable is called the rake. So one name for this architectural feature is “eave return,” I suppose since it sort of looks like the eaves are wrapping back in toward the center of the building. A Field Guide to American Houses also refers to it as a cornice return.

Below the rake are a bunch of supports for the roof painted in bright red. These supports also have lots of potential names. If you want to be less specific, you could just call them brackets. If you want to be fancy and classical, you could call them modillions. You could also maybe get away with calling them corbels, which as far as I can tell are like modillions but tend to be more vertical than horizontal. These brackets are pretty horizontal, so maybe “corbel” is a stretch. Oh, all the words!

In any case, the brackets are an important feature that point us toward identifying an architectural style in use here. If we look at the pictorial key in A Field Guide to American Houses, we can see that brackets like this suggest an Italianate architectural style. The quoins are also a good indication that this is an Italianate house. That said, the windows don’t really fit the bill—Italianate houses typically have windows with rounded arches above, though that doesn’t always have to be the case. Also the window sashes have too many panes of glass and too many muntins (those are the parts that separate the panes) to really be Italianate. All those tiny panes suggest a colonial revival style.

I decided to look up the house online, and indeed it’s described on Redfin, a real estate site, as an “historic Italianate-style colonial.” So it seems to be a mix of both. The house was built in 1857, which according to A Field Guide to American Houses is roughly in the middle of the period when the Italianate style was popular.